Thinking and learning about urban places – the way they change, why they change, what forces shape them and how they shape us requires historical urban data (statistics, maps) and an understanding of the concepts and theories surrounding the collection and use of the data.

A brief overview of key concepts and sources useful for understanding the context of the maps and data on Engaging Columbus includes:

Mapping cities has a long history. Among the earliest maps are those showing property boundaries in Mesopotamian cities (ca. 1300 BC). 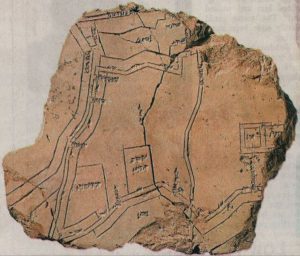 The concept of property ownership, and the need to survey and inventory (with maps) property boundaries and parcels has been a significant driving force behind detailed mapping to the present time.

Our Engaging Columbus project, using funds from the Mellon Foundation, has scanned and georectified and georeferencing a series 1899, 1910, 1920) of detailed atlases for Columbus created for property and real estate research. These Baist’s Atlases of Columbus detail buildings, property boundaries, subdivisions, streets, public spaces, water features, and other urban phenomena, providing maps of property and the built environment of Columbus over 30 years in the early 20th century. Baist’s Atlases also have subtle social data: for example, ethnicity is suggested by the kind of places of worship, the economic landscape by the kinds of factories, and institutions (“Hospital for the Insane,” “Deaf and Dumb Asylum”). Sanborn Fire Insurance Maps (created around the same time to document building characteristics for determining insurance fees) are a complementary, late 19th and 20th century source of detailed urban maps.

While a subtile social landscape can be read from city atlases like Baist’s, other sources supplement such atlases of the built urban environment. A series of studies (detailed below) focused on Columbus in the 1920s provide a wealth of data on the social geography of the city. These sources can be understood in a broader context of urban social mapping, including the work of Charles Booth, Hull House, the Chicago School of Sociology and the U.S. Census Bureau.

Mapping the Urban Built and Social Environment in Columbus 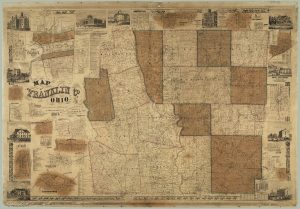 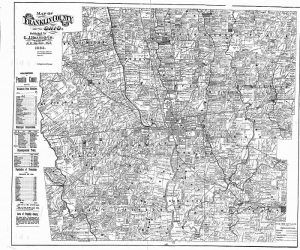 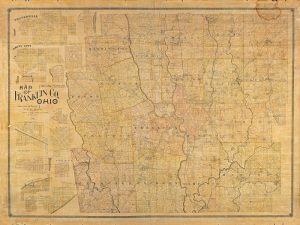 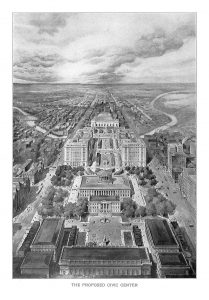 1908: Report of the Plan Commission for the City of Columbus Ohio

In 1906, the Columbus City Council approved a five-member commission to study “the streets, alleys, parks, boulevards and public grounds,” of the downtown area. The commission included an architect, landscape architect, and sculptor from New York City, as well as an architect from Philadelphia. Also appointed was Charles Mumford Robinson who the Columbus Dispatch claimed was “one of the most noted landscape architects of the country.” This plan they produced typifies the “City Beautiful” movement that dominated urban planning at the turn of the twentieth century. The movement, perhaps best articulated in Chicago, hoped to bring moral and civic virtue to urban residents through monumental grandeur.

1922: An Introduction to the Economic and Social Geography of Columbus, Ohio

Forest Ira Blanchard earned the first Geography Master’s Degree at Ohio State University. His thesis was advised by C.C. Huntington. Blanchard’s thesis was researched and written around the same time as McKenzie’s The Neighborhood and is also influenced by the Chicago School of Sociology with its emphasis on empirical data collection. Blanchard set out with a panoramic camera (a somewhat rare device at the time) to document areas with specific ethnic, racial and economic concentrations. Blanchard’s thesis is remarkable in that the photos are not of significant buildings, monuments or locations, but instead relatively mundane street scenes – rare content for the era and a valuable resource for assessing urban changes.

Also in Blanchard’s thesis are five manuscript maps. On each, Blanchard sketched out data he collected on areas of Columbus on a printed city road map. The maps are linked below, with a description of their content.

Map 1: Location of Industries, Sphere of the Influence of Railroads and Industries, and Telephone Conduits. Map here (8.1mb PDF).

1923: The Neighborhood: A Study of Local Life in the City of Columbus, Ohio

McKenzie’s dissertation (from the University of Chicago, but completed while he was in Columbus) is classic Chicago School of Sociology: a focus on fieldwork and collecting empirical data (particularly ethnic and racial data) as a means of understanding the human patterns in cities. Contains a wealth of information about Columbus neighborhoods and their social patterns around 1920. Published as a series of articles, then as a book by the University of Chicago Press.

The first map below was the source for the Racial, National, and Industrial Localities map app at this site (here). The second map shows the homes of “delinquents” (under court supervision). The final pair of maps shows voting patterns in Columbus on prohibition and women’s suffrage. A visual comparison suggests that districts voting for women’s rights were also strongly supportive of prohibition. 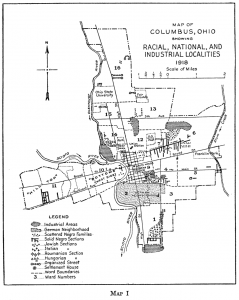 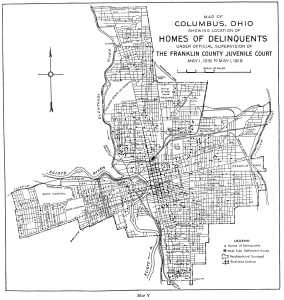 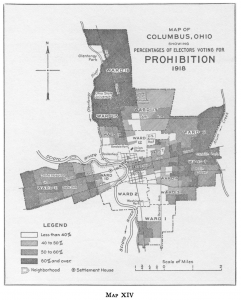 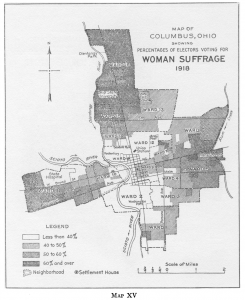 In 1922, the Columbus Planning Commission was created and the city hired Cleveland zoning expert Robert Whitten. Like many cities at the time, Columbus saw zoning as the means to creating an orderly city and this report typifies the period’s faith in rational planning by experts.

These cartoons were taken from the report. 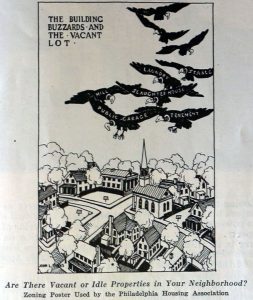 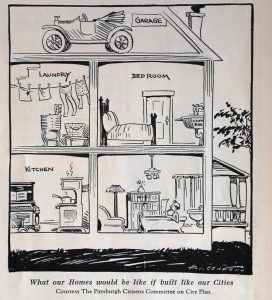 Full text version if book is available from the HathiTrust Digital Library.

Sociologist Mary Louise Mark’s survey of African Americans in Columbus, published in 1928 contains a wealth of data on black neighborhoods in Columbus. Maps below show “negro neighborhoods” around the mid 1920s, and a 2nd map shows areas included in the housing study documented in Mark’s book. 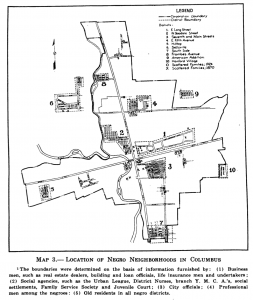 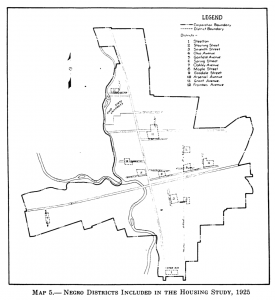 1916: Columbus Pool Rooms: A Study of Pool Halls, Their Uses by High School Boys, and a Summary of Public Billiard and Pool Room Regulations of the Largest Cities in United States

Delinquency was one of the early 20th century concerns in many places in the U.S. Pool halls were a focus of attention, as a source of temptations for juveniles. This survey of Columbus pool halls provides a snapshot of a pervasive part of early 20th century urban landscape, with maps, images and judgmental comments throughout. 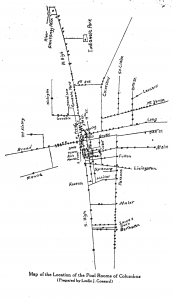 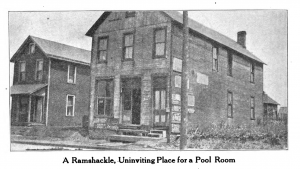 In response to the unprecedented growth of American cities following World War II, the US Congress passed Federal Housing Acts in 1949 and 1954 that provided cities funding for studies that would facilitate slum clearance programs and urban renewal projects. Columbus hired the nationally known consulting firm of Harland Bartholomew and Associates out of St. Louis to prepare twelve preliminary reports that would serve as the outline for a master plan. Between 1954 and 1957, the $90,000 study produced the seven reports linked to above, as well as additional reports on housing (1955), capital improvements (1956), and public buildings (1956) as well as a summary report (1957).