Skip to content
“The Home Owners’ Loan Corporation (HOLC) was created in June 1933 by the US Congress. The purpose was to refinance mortgages in default to prevent foreclosures. In 1935 Federal Home Loan Bank Board asked HOLC to look at 239 cities and create “residential security maps” indicating the level of security for real estate investments. On the maps, the newest areas — those considered desirable for lending purposes — were outlined in blue and known as Type A. These were typically affluent suburbs on the outskirts of cities. Type B neighborhoods were considered ‘Still Desirable,’ whereas older Type C neighborhoods were labeled ‘Declining’ and outlined in yellow. Type D neighborhoods were outlined in red and were considered the most risky for mortgage support.” The outcome of the practice of “redlining” was to deny mortgages and business loans to minorities and lower income borrowers.
The original Columbus “Redlining” map from 1936 is below, followed by an interactive version. A 12.2mb jpg file of the map is here. 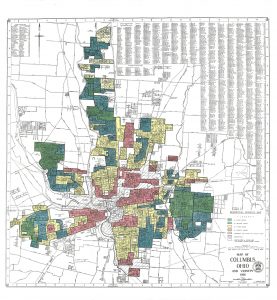